The ImpleMentAll consortium is made up of 18 partners from Europe and Australia. Below you can see a list of all the partners contributing to this project. Click on a partner to read more about them and find their contact information.

The Region of Southern Denmark (RSD) has 1.2 million inhabitants and four hospital units running 18 hospitals. The Region collaborates closely with 800 GPs, and the 22 municipalities that are responsible for preventative services, rehabilitation, and home care. All hospitals in RSD have implemented telemedicine services and the level of electronic communication is very high.

The Centre for Innovative Medical Technology (CIMT) is a joint research and innovation centre for Odense University Hospital (OUH) and University of Southern Denmark (SDU), and part of the Department for Clinical research. The centre is very active in research and innovation projects at a European level, often in the leading role and with a focus on communication. These European projects all revolve around healthcare innovation and technology, including eHealth, eMental health, telemedicine, infrastructure, and standardisation.

The Mental Health Services in the Region are embedded in secondary care and offer assessment, diagnosis, and treatment of citizens with serious mental disorders in close and binding collaboration with the practice sector, the municipalities, and the somatic healthcare service in the Region. The regional Centre for Telepsychiatry opened in Odense in November 2013 as the first of its kind, not only in the region, but in the country. The centre carries out a number of ongoing projects in the field of 'telepsychiatry' – delivering psychiatric treatment and expertise at a distance. The projects include telemedicine treatment for young people suffering from depression, telecommunication between citizen/patient, general practitioner, and the psychiatric hospital, as well as specialised assistance between doctors and experts from one department to another using telecommunication.

In the Region of Southern Denmark, a dedicated clinic for iCBT was established in 2014. The clinic is called “Internetpsykiatrien” (the Clinic for Internet-psychiatry) and is situated in the Centre for Telepsychiatry. The patient groups targeted by the clinic comprise persons suffering from mild to moderate levels of anxiety and depression. Patients are referred by self-referral. The service is currently free of charge for the patients. The clinic is staffed with six clinical psychologists (3 FTE’s) and treats approximately 200 patients per year.

The primary original objective for implementing iCBT was based on rapidly rising costs of depression treatment. By implementing iCBT, it was hoped that more patients could be treated for the same financial resources, hence hopefully levelling the rise in expenses. Secondly, it was hoped that more people with untreated depression would get access to treatment. Currently, the service has operated for approximately three years and it is now the objective to scale up to cover all regions of Denmark making it a nation-wide service.

Claus is the Chief Innovation Officer in the Centre for Innovative Medical Technology (CIMT) – a joint research centre between OUH and SDU – and is in charge of development, testing, and implementation of telemedicine and innovative technologies as well as overall responsible for international collaboration and projects for the current university hospital OUH, the new OUH (2021), and the region as a whole. He was the overall coordinator of the successful EU projects RENEWING HEALTH and MasterMind.

Mette Atipei Craggs holds a Master of Arts in International Business Communication and currently works as an Innovation Consultant in the Centre for Innovative Medical Technology (CIMT) at Odense University Hospital (OUH). Mette has extensive experience with communication and international project management from her work at OUH and in MedCom. Her role in the ImpleMentAll project is Project and Communication Manager. 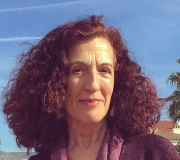 Mette Maria Skjøth, PhD, holds a Graduated Diploma in Business Administration – Organization (HD) from the University of Southern Denmark and is a Registered Nurse. Mette Maria is currently project manager at the Centre for Innovative Medical Technology (CIMT) at Odense University Hospital (OUH)/ University of Southern Denmark and at Lillebaelt Academy for Professional Higher Education (EAL). She has a long experience in organizational management, project leadership, innovation and research all with the aim of improving quality in health care, patent safety and workflow within the health care sector. Mette Maria has recently defended her PhD Thesis with the title “Informed choice about prenatal screening for Down syndrome – the development and effect of an eHealth tool”. Mette Maria has taken part in several international projects on both a manager and scientific coordinator level e.g. MasterMind, ImpleMentAll, HealthGames, Applied Health, ePatch.

Kristine Tarp holds a Master of Arts in Anthropology and Ethnography from Aarhus University and a PhD in Health Sciences from the University of Southern Denmark. Kristine’s PhD thesis examined the effectiveness of optional videoconferencing-based treatment of alcohol use disorder. Kristine has a postdoc position at The Centre for Telepsychiatry in the Region of Southern Denmark.

EPA: The 28th Congress of the European Psychiatric Association

The 28th European Congress of Psychiatry, EPA 2020, is guided by the motto, The

Theme ‘Population-based approaches to integrated care: Improving health and we

1. Your cookie settings
Functional cookies, Marketing and tracking
Cookies that give us the ability to analyse the way the website is being used, so we can measure and adjust, to improve our website for our visitors. And so we can use cookies to show you adds that are relevant to your interests.
All